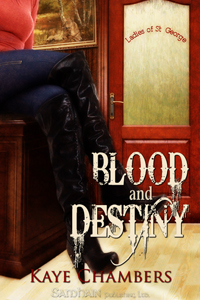 The Day is HERE!

That’s right, folks.  BLOOD AND DESTINY has officially launched onto the world.  This book is near and dear to my heart.  I’m very excited to say thank you to Anne Scott for helping me make it the best story it could be.

And Yes, to celebrate, I’m having a contest!

There will be several, smaller prizes, given out as well ranging from an Amazon $25 giftcard to a $50 Prepaid Visa giftcard.

Additional prizes will be given out on my yahoo group:

When the past bites, bite back.

For Destiny St. George, shapeshifting lioness and private investigator, her best friend’s looming wedding is little more than a reminder of her failed relationship with vampire king Marcus Smythe. Tired of being only one of many mistresses—and dinner entrees—she’s stayed away from the vampire scene altogether. Until a missing-person case forces her to seek his help.

Knowing that pressing Destiny is not the way to convince her to give their relationship another try, Marcus has been waiting her out—and his patience is rewarded when she steps into his nightclub. Now is his chance to lure her back into his arms. This time, he plans to keep her there.

Destiny’s not sure which is worse: working with Marcus, or trying to remember all the reasons she called it off with him. And when it becomes clear the case is an elaborate trap to avenge a millennia-old grudge, she finds herself caught between love and instinct—while the clock ticks down on an innocent victim’s life…

Product Warnings:  Vampires determined to take more than a bite out of the heroine. A lioness sure that she’s going to have the last word.

View all posts by kayechambers